In the 1950s, American industry was booming and within the automotive sector, manufacturers were stepping out of the box like never before. This was a period when engineers and designers were free to innovate, which led to the creation of a variety of groundbreaking vehicles.

At General Motors, work resumed on researching the feasibility of gas turbine engines in automobiles, a project that had been initiated in the early 1940s.

The idea of ​​modifying an aircraft powerplant and stuffing it into a car was not new, with Fiat successfully producing the S76 “Beast of Turin” in 1910. However, using jet engines was a completely different venture that captivated the minds of many bright people. Engineers of the era.

One of them was Emmett Conklin, a great figure in GM history. He joined the company at a young age in the 1920s, initially as a construction worker for the Milford Proving Ground, the world’s first dedicated automobile testing facility. After that, he swapped out the tires of test vehicles for a living, then became a test driver. A highly intelligent man with a passion for engineering, Conklin often worked on the test vehicles he drove, repaired, and improved them. Management took notice and promoted him to test track supervisor and eventually, he was selected to work on the turbine research program that began in the 1940s.

After World War II ended and GM began pumping resources into the project once again, Conklin was selected to oversee the development of America’s first fully functioning gas turbine car.

Envisioned strictly as an engineering and styling concept, the Firebird I was ready in 1953. The man behind Project Opel is Harley J. Earl, which eventually became the Chevrolet Corvette, it looked more like a fighter jet than an actual car.

Made entirely of fiberglass-reinforced plastic, the bodywork (or rather a fuselage) inspired by the Douglas F4D SkyRay fighter jet features small delta wings, a tailfin decorated with the logo of GM’s Air Transport Section (GMATS) and a bubble Canopy is included. which covers the single seat cockpit.

A 35-gallon (132.5 litre) fuel tank was placed in the nose of the vehicle and behind the small cockpit was a formidable powerplant with a terrifying name. Developed under the direction of Charles L. McCuen, the Whirlfire Turbo-Power was a two-part turbine engine with a gasifier connected to a secondary power unit via a flexible shaft.

The gasifier consisted of a compressor and a turbine mixed compressed air with fuel inside two combustion chambers. This produced hot gas that drove a second turbine inside the power unit, which was connected to the Firebird’s rear axle via a two-speed planetary transmission.

Output was rated at 370 hp (280 ) kilowatt) and the car can reach a theoretical top speed of 200 mph (322 kph). This required a capable braking system so that engineers mounted 11-inch (28 cm) brake drums on the outside to help dissipate heat more efficiently. In addition, split brake flaps were fitted to the sides of the wings which could be activated using a switch on the steering wheel.

The Firebird I was so intimidating that the only person deemed qualified to drive it during initial tests was none other than Emmett Conklin. Legend has it that he took it to 100 mph (160 kph), but soon after shifting to second gear the tires lost traction which almost resulted in a crash. He was quoted as saying “I’m too old for this ****!” and eventually assigned test driving duties to three-time Indy 500 winner and engineer Maury Rose.

Before testing began at the Indianapolis Motor Speedway, Charles L. McCuen also drove the prototype but crashed and nearly killed himself in the process. The car was repaired, and Rose eventually underwent several tests but to the frustration of the experienced driver, GM banned further high-speed runs. Thus, the turbine-powered concept never reached its hypothetical top speed.

One of the wildest concept cars ever built, the Firebird I XP-21 paved the way for three more gas turbine-powered GM prototypes released in the 1950s. Along with the Rover JET1 or Fiat Turbina, it was one of the first cars to use this type of engine.

It made its public debut at the 1954 Motorama, an auto show organized by GM from 1949 to 1961, and was used as a successful promotional vehicle for the company for years to come.

It can now be seen at the GM Heritage Center in Sterling Heights, Michigan. Harley J. A miniature version tops the Earl Trophy, which is awarded to the winner of the Daytona 500.

Courtesy of dtRockstar1, you can see both the Firebird I and its other sibling in the YouTube video below. Unfortunately, it’s being brought to the 2018 Eyes On Design show, so you won’t hear the engine roar, but it’s one of the best modern footage of the iconic concept car. 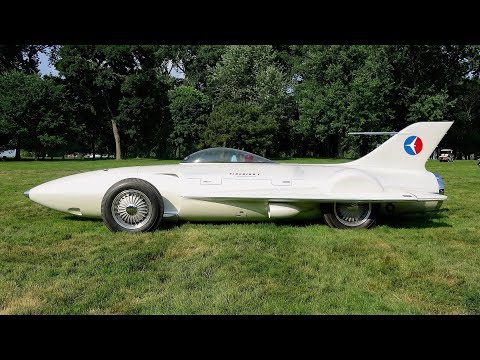