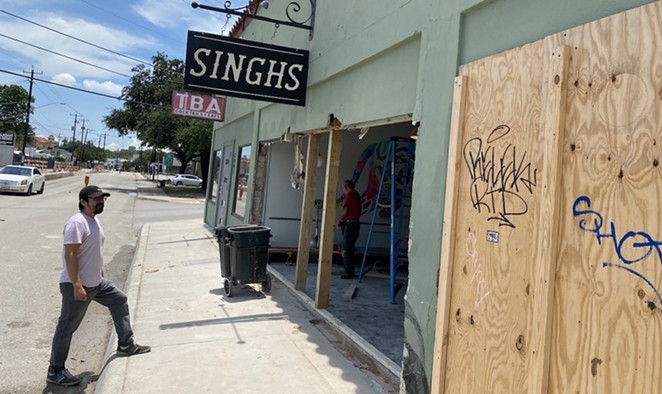 At around 2 a.m. Sunday, a car rammed in front of a St. Mary’s Strip fixture Singh Vietnamese, kicking out the front wall of the restaurant, but stopped before hitting the order counter and the kitchen.

As construction crews worked to clear the debris on Sunday afternoon, Eric Trevino, a partner at the popular eatery, said he hoped to serve again next week. But, he said, factors like city permitting are out of their hands.

While the restaurant has yet to comment on the damage via Facebook at press time, customers were already posting on the page asking how they could help.

“We appreciate all the support we are getting from the people,” Trevino said. “The support has been awesome.”

Trevino said Singh can set up an online donation account to cover the expenses. However, most of the damage was done to the building, which is rented out by the restaurant. The business lost only a few fixtures and tables in its front dining room.

The collision occurred after a man went through a stop sign at North St Mary’s St & Russell Place, news site MySA reported. The driver was taken to SAMMC in stable condition, and officials were expected to test him for DWI. According to the story, the charges are pending.

A small amount of blood was visible on the wall of a restaurant on Sunday afternoon.

Trevino said a portion of Singh’s storefront was already climbed up after another driver hit the building six weeks ago. The complex, located in the heart of the north-city’s nightlife district, has been hit by vehicles several times over the years.

Singh opened on the Strip in 2018 after Trevino and business partner Louis Singh had a successful run with the food truck of the same name.

So many restaurants, so little time. Get the latest San Antonio food news with our Flavor Friday newsletter.