Subaru is today showing us all sorts of visuals of its upcoming Solterra electric crossover. The front, rear, side and interior teasers of the crossover are available for viewing, and you can scroll through them all in the gallery above.

However, we’ll start with the little bits of information Subaru has given us in addition to the photos. Subaru confirmed that all-wheel drive will be standard with the Solterra. It also claimed “ample backseat and cargo room”, but did not provide figures or photographs to support the claim. Ultimately, Subaru said it expected to come with “advanced security technology,” but did not further define what that technology consisted of.

Now, onto the pictures. The completely unshielded and unshielded photo of the rear bumper and taillights is a good place to start. We can see some bright LED lights on either side of the hatch with a spoiler in between. There’s a ton of badging out back with a total of five symbols (including the center Subaru logo). The most interesting new badge is the blue “EV” logo in the lower right corner. There is some black plastic cladding under the bumper, possibly to give some rugged vibes to the rear of the EV.

The front view gives us our first look at the LED headlights of the car. They are pointed and angular, matching the shape of the sheetmetal that surrounds them. Even after the headlights are gone, the hood line appears to be turning sharply upwards. We can catch the tiniest glimpse of the grill. A Subaru logo is visible through the woods, and the flat black panels appear to be the backsplash for which the logo rests. However, the finer details here are still impossible to exhaust completely. 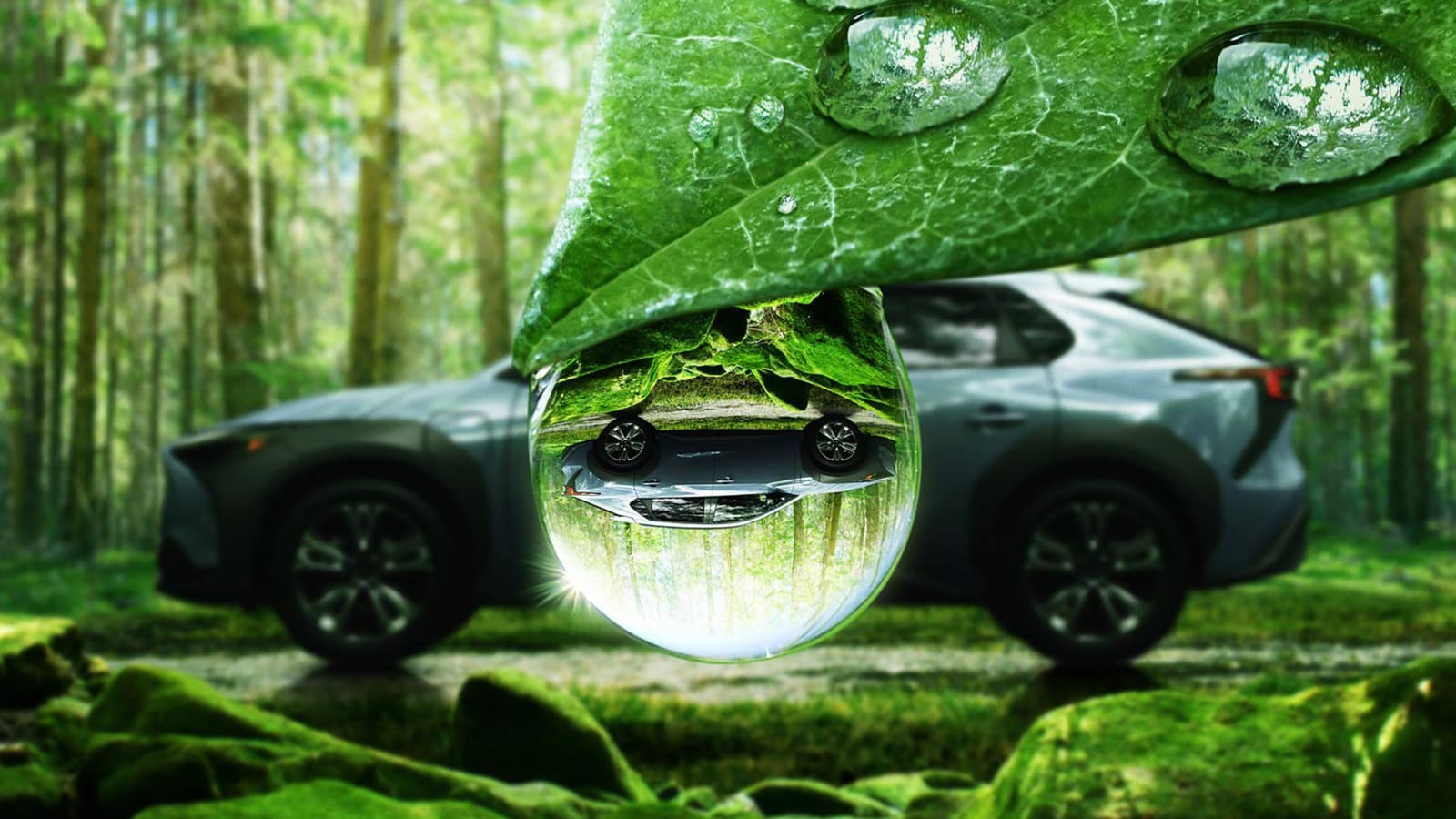 Subaru’s last exterior teaser shows the entire side profile including the production wheels. This is where it is given that the Solterra is going to look very similar to its Toyota twin (the car being jointly developed with Toyota), the bZ4X. The two are perfect copies of each other, as they share every body line and creases in the front and rear lights. Even the body cladding/Toyota trim decor shapes are the same. One differentiator from Subaru we can see here is in the wheel design. Solterra’s wheels appear more rugged than the stylish rims on the bZ4X. Still, if you’ve seen bZ4X, you can basically say you’ve seen Solterra now.

Perhaps the most exciting teaser photo of all is the single interior shot Subaru has dropped today. It features a darker interior to highlight the screen and basics of interior design, and it certainly looks upmarket compared to Subaru’s current interior design language. Even with the recent upside changes with the new Outback and Legacy, it’s a cut up. A huge widescreen dominates the center stack, while touch haptic control buttons waterfall beneath it. This leads to a rotary shift knob surrounded by even more tactile controls. There’s also an odd sequence of lights right behind the shifter that we’re not quite sure of yet. The last bit we can see is from the digital instrument cluster which looks to be pushed far enough forward towards the windshield – just look at how long the steering column is visible. 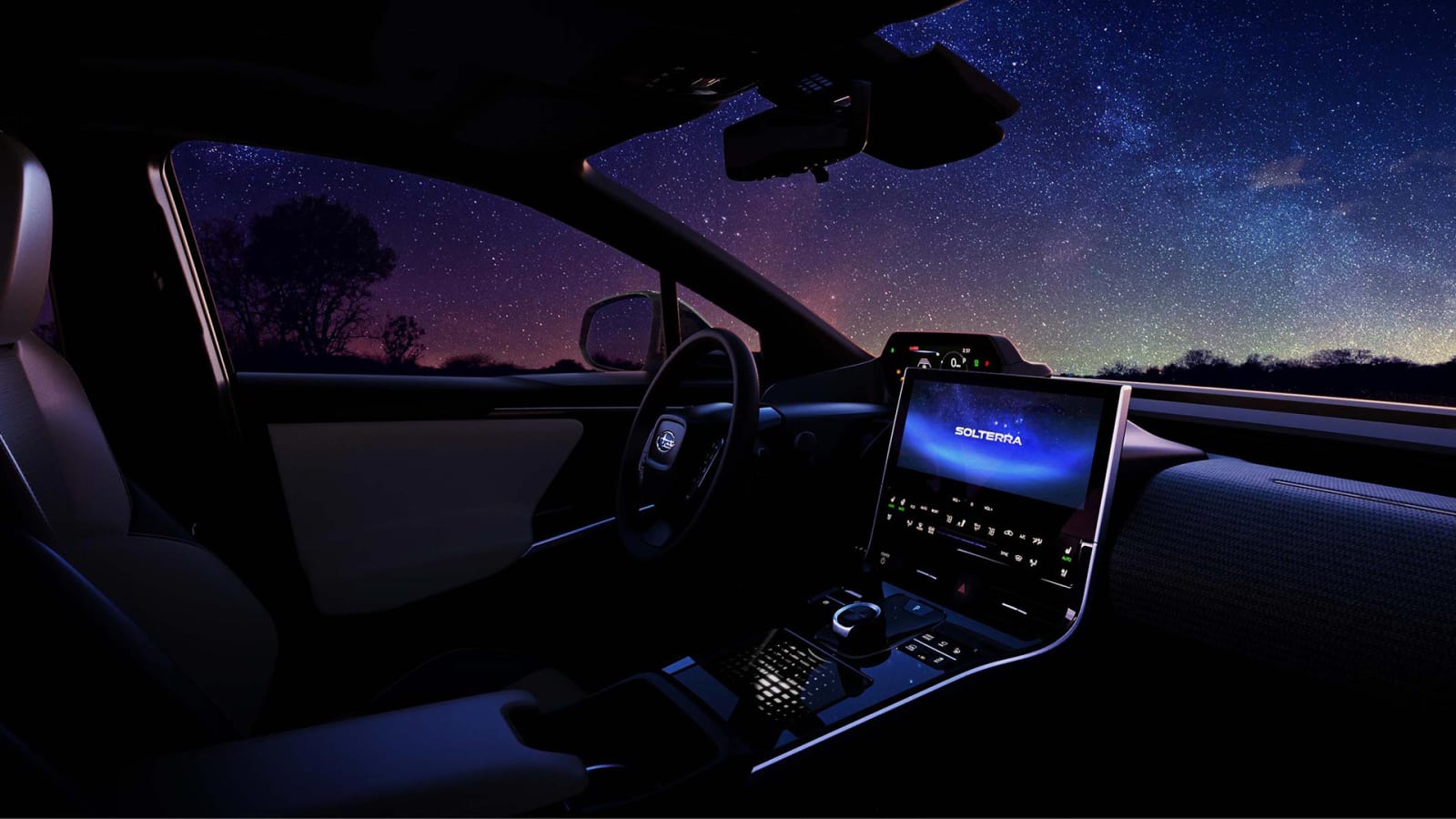 Both the door panels and dash look like they’ve been slicked into some unknown (perhaps green/recycled?) trim material that we’re eager to explore. It certainly doesn’t look like any Subaru interior we’ve seen, and once again, that’s because of how much Toyota has in it. If you look at pictures of the bZ4X’s interior, the Solterra’s general design and materials mirror those used by Toyota. That’s not a bad thing, but it’s worth noting how similar these two cars will ultimately be.